Student Essay:
A Walk in the Woods 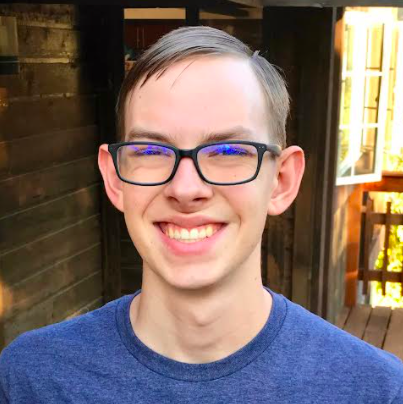 The splendor of nature is not a cliche, but a reality that merits our attention.

When taking your dog on a usual walking route, you notice small details that seem new each time. However, you also grow so accustomed to your walk that you commit every twist and turn to memory, finding yourself, even without consciously doing so, making every step in the right direction, and eventually arriving safely at home.

My family and I have an excellent hiking trail that runs directly from our back gate, and, over time, we became acquainted with every tree, rock, and bush, even naming some. There is a certain dead oak, still imposing in stature, that we christened the Walking Tree, because its leafless limbs resemble appendages, waiting to ensnare oblivious passersby; we say that each night it moves slightly, almost imperceptibly, toward we know not what. We once traveled across town to another trail, where we observed what appeared to be his relatives. Perhaps he is creeping to a long-awaited reunion. Supposedly, our region is inhabited by deer and other such animals, but they are not interested in socializing with us humans. The only glimpse we have had of one was a deer walking on a nearby hill; he quickly took his leave. Nevertheless, the creatures we do have an opportunity to relish are no less spectacular: red-tailed hawks with their high-pitched screeches glide overhead, while Steller’s jays hop on the coarse dirt. Even the occasional owl will silently traverse the gaps between the treetops, leaving the viewer to marvel in its wake. These wondrous events occur on our very own simple trail, making it, in my view, one of the most beautiful places on earth.

This is the forest primeval. The murmuring pines and the hemlocks,
Bearded with moss, and in garments green, indistinct in the twilight,
Stand like Druids of eld, with voices sad and prophetic ...

Our dog, a rather wooly Siberian Husky named Kodiak, is seemingly still absorbing this trail into his canine mind, stopping every few paces to examine a new bush or shrub, then bounding forward to his spot as the front, apparently thinking it his rightful position. If he notices us making ready for a trek, he becomes giddy with excitement—and on the rare occasion when my father heartlessly neglects to bring Kodiak on his morning walk, he is visibly hurt and annoyed, holding a grudge for the rest of the day. Although he delights in his escapades, he loathes his harness with every fiber of his being; sometimes a treat will coax him into it, but occasionally even that fails to lure him into the dreaded torture device. Once actually on a stroll, however, he utterly forgets the harness in his unadulterated and limitless joy. He pulls his walker along with him, creating doubt whether the human or the dog is being walked! This continues to the point of self-strangulation, as he wheezes and still strives to run faster. If we were to fashion a cart device he could pull, I believe he would wholeheartedly do so. In the hot California weather, his furry body heats up quickly, making him pant furiously during and sometime after a walk. Despite the suffering he must endure, he unfailingly presses on; to him, the comparatively minor discomforts are worth his undying objective.

Our trail transforms as you go farther and farther, first manifesting itself as a wildlife-filled pine forest, then a shrubbed desert, then, even farther, as a flowered, rocky mountain (at least in spring). It also changes depending on the season, for a creek runs in spring and early summer from the snow-melt. The dog, of course, loves splashing and rolling in it. He relishes lapping at the tiny waterfalls, sometimes nipping at them as if they were animals. As I write, it is late summer, and the stream is all but dried up. But I know that in the fall, the rains will go about their business and the river will trickle, both hearkening back to and foreshadowing its full glory. Still later, after winter, spring will thaw the snow from the distant peaks, and our little creek will burst forth once more. Between the two periods, something still more incredible occurs. You may have every nook and cranny of the trail memorized like the back of your hand, but when the snows come, the landscape metamorphoses. It becomes a dream land, with white powder coating the ground, bushes, and trees. You hardly remember what way is what, and if you tried, you might become lost in this strange world. Kodiak, like myself, sees this as the epitome of the sublime. Where once we were toiling in the arid heat, now we shield ourselves with coats, gloves, and snow pants. Kodiak’s coat, of course, is already perfectly suited to this new climate. And so, the cycle of seasons repeats, as the Creator ordained. But the pines remain unchanging.

Even they will some day die—from a fire, perhaps, or mere decay. The very rocks and hills shall pass away, and make way for a world that shall be altogether more perfect and magnificent. But for now, as part of the one in which God has placed us, we, with the dog, open our gate into endless splendor.

Caleb Scott is a homeschooled senior from Pine Valley, California. He is interested in a variety of subjects, including history, political science, and biochemistry, and is considering attending Colorado Christian University, The Master’s University, and Hillsdale College. Some of his hobbies are reading, writing, Krav Maga, and playing the upright bass and ukulele.

Every time the CLT is administered, the forty highest-scoring students are invited to contribute an essay to the Journal. Congratulations to Mr. Scott, and merry Christmas!