Student Story:
The Pantocrator—Part I 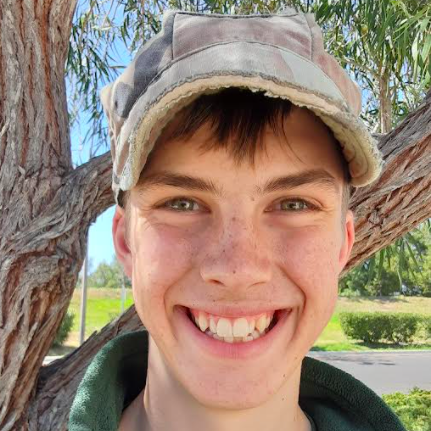 Oddan hurled the brush into the next room. It smashed against the cobbled wall and broke with a clatter, streaking the wall with a scarlet swash. He cursed under his breath. The face on the wood was glaring at him. Everything else was perfect. Perfect proportions, perfect posture, perfect color. But still, the face glowered at him. This was not an appropriate expression for the Most Holy Son of God. Pushing aside his stool, he got up, stretched, and proceeded into the hall for another horsehair pencil.

A door slammed downstairs. Oddan jumped, fumbling with the copper jar. It slipped from his hands, crashing to the floor. One paintbrush snapped; the others disappeared under a squatting chestnut bookshelf. Oddan’s face paled. He froze, only tolerating his lips to move in a silent prayer.

“Oddan! Are you—” the intruder paused to catch his breath, “—home?”

“Powstaniec! Thank goodness it was you!” Oddan rushed to the stairs and stumbled down, taking three at a time.

“Where is Father Meczennik?” Powstaniec wheezed as he spoke, his gray beard muffling his vowels.

“His warrant was issued for the department. I left only a few minutes before they did.”

Oddan ran to grab his coat. Pulling it over his shoulders, he raced after the older man, following him down cold roadways and tight alleys. Snow was falling freely. Looming up ahead, gray smokestacks billowed in an endless litany of belching blasphemies.

“Where should we look?” Powstaniec asked.

“He probably packed up his stall in the Circle about ten minutes ago.” Oddan paused, panting. “Let’s check the church. He usually stops there on the way home.”

They sprinted into a courtyard. In the fading sunlight, they spotted the husking remains of a cathedral. A dull hint of firelight glowed from inside, spilling outside onto the snow-covered cobbles. Pausing for a moment, they collected themselves, then eased into the chapel.

Pillars bent and twisted, stars peeking through the jagged holes in the roof, and ivy strewn walls crumbling slowly into the dust from which they were fashioned, age and neglect had deemed the cathedral a wraith in comparison to its former glory. Weaving his way through rotting piles of wooden tiles, Oddan spotted a small candle busily weaving a fantastic wreath of light. A small, kneeling man, clothed in a simple brown habit, prayed before the remains of the altar, flickering candlelight casting his shadow over the nave. Oddan sighed. “Father Odslonic.”

The priest turned. His eyes glinted in a smile.

“Oddan. How have you been, my son? And how is the Pantocrator? I can already see him, standing there on the altar. It’s been so long … We haven’t had a true icon in decades.”

“Oh, Father! I can’t seem to find his face. It hides in the fringes of my mind, dancing about in the shadows. Sometimes, I feel like I can almost—But then my fingers mar its beauty. I set down the brush and see a dictator, not the Deity.”

Oddan startled, then shook his head. “Oh! Father, have you seen Meczennik? Did he come by the chapel on his way home?”

The priest’s wrinkled face clouded. “The warrant? Ah, I suspected it would begin soon. The government no longer needs to endure us. There are dark times for Catholics ahead. No, he hasn’t stopped by here yet. But he usually ends his day before the altar … However, he won’t be safe here. Not anymore. We need to convince him to leave the city for a while …”

The priest let out a long sigh. “Oddan, you should head to the Circle. Meczennik probably stayed late to finish up another toy. But take the Parawoz. There should be a station near the end of the plaza. Now hurry! Go, and may God be with you!”

Oddan broke into a jog, aiming his steps toward the nearest subway stairwell. Standing on the platform, he waited for the next train to Srodek circle. Examining the curved brick walls, Oddan spotted a large graffiti mural. It depicted the traditional muscular citizen, who was discarding a rosary constructed of chains. The caption read, “Your work will set you free!”

Soon, smoke crept through the tunnels, and the painting hazed into indefiniteness. Oddan heard the hollow hoot of a whistle. A puffing locomotive sped into view. With a screech, the train slid to a halt. Ornamented gears twisted down the side of the railcar, revealing a small door. A sharp click, and the door opened. Oddan stepped inside. He lost himself in specters of his art. A faceless king on a wooden board. He searched for the missing features. Where were the noble brow, smiling lips, and compassionate eyes? Like dark ghosts hiding in the wavering mists, their images would fade whenever he tried to focus on them. Oddan buried his face in his hands.

A pleasant voice purred from the ceiling, announcing his destination, “Srodek … Circle …” Oddan rose from his leather seat and headed for the exit. Stepping out into the station, he climbed up the steep stairs into the Srodek.

The Circle was the city center for economic trade. Although the sun had long since fallen below the rim of the world, Srodek was still alive and bustling with activity. Oil lanterns hung from fragile beams, illuminating exotic wares and bustling merchants. As Father Meczennik’s shop lay near the northern edge of the plaza, Oddan began to push his way through a maze of booths and potential buyers.

“Most magnificent rugs in all of Odstapic!”

“Come see a magnificent specimen of the great fire-beast!”

“Brushes and pens, the finest in the land!”

Oddan strode toward the seller of brushes. Glancing over the supplies, he reached for a maids-hair pencil. He examined it, then turned to the merchant.

“How much for the brush?”

“Ha!” The man laughed, clutching his chest, “Oddan, you rascal! Have you broken another of my beauties? I should ban you from my shop. You and your disregard for fine tools! Ha!”

Oddan deposited several pieniadze into the merchant’s outstretched hand. “Kupiec, if I did not repeatedly condescend to purchase your inferior goods, you and your brushes would be as poor as a cellar-rat.”

“Too true! Too true!” The man laughed again, “Goodnight to you, Oddan!” A commotion resounded from the north end of the market. Someone screamed, and a few shouts rose above the heavy air. Oddan’s face paled; He clutched the brush and jostled his way through the thick crowd toward the source of the disruption.

Kolbe Lange is 16 and completing 11th grade. Homeschooled for most of his life as a Navy dependent, he lives and studies on Camp Pendleton, CA, where he enjoys producing simple films, designing board games, scouting with FNE, and wearing his coveted hat. While still undecided about which college he will attend, he is considering programs for architecture, robotic engineering, and creative writing.

Each time we administer the CLT, we invite the forty highest-scoring students to submit an essay or piece of creative writing to the Journal. Congratulations to Mr. Lange on his outstanding score! If you enjoyed this piece, you might like some of the other creative writing our students have submitted, like this story on artificial intelligence or this homage to Jonathan Swift.