The Great Conversation
Life & Death—Part I 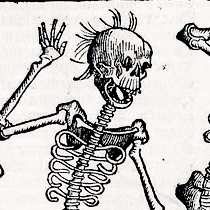 People and societies differ drastically in countless ways, but one of the few true human universals is death.

We’ve talked about this entry on the list of great ideas before—some time ago now, and focusing mainly on the biological sense of the term “life.” This does yield plenty of interesting thoughts. One of the puzzles of modern science is how to classify viruses: are they, biologically, alive? They do share some traits with living things, like the power to reproduce. But they lack other relevant traits (e.g. eating), and their reproduction is wholly parasitic—viruses take over their host’s cells and more or less “hotwire” their nuclei, changing them into factories that produce more of the infecting virus. Most taxonomists consider viruses a grey area between life and not-life (more like a living thing than, say, a rock, but less alive than a toddler, however many viruses the toddler may be showing hospitality to at the moment). Hence, viruses may have been an exceedingly ancient step in evolution. Or, they may represent the opposite: parasites that became so atrophied and dependent that almost nothing but their genetic code is left.

But we digress, and that before we have even begun, for, in the history of ideas, the natural course is to begin at the wrong end. There is no Western thought (as we loosely call it) apart from Plato; and Plato, professing to repeat what his master Socrates had told his disciples as he waited to receive the hemlock, declared: All philosophy—that is, love of wisdom—is a preparation for death.

Plato himself was an heir to meditations on death that began as far back in time behind him as he lies behind us. The earliest form of the Epic of Gilgamesh has almost certainly not survived, but when Socrates was wandering around Athens bothering people, the version of the Gilgamesh familiar to us was already far more than a thousand years old. The hero of the story becomes deeply troubled by his mortality after losing his dearest friend, and strives in vain to find the secret of eternal life. He travels to the end of the earth to consult with Utnapishtim, whom the gods blessed with immortality, but the sage only warns him to reconcile himself with his eventual death. As a test Utnapishtim sets him quickly shows, Gilgamesh cannot even vanquish the vastly lesser power of sleep for as much as a week. How then could he expect to achieve deathlessness? To his credit (despite his previous hubris, and a temporary detour involving an enchanted flower), Gilgamesh does learn the sage’s lesson. Already, here in the morning of the world, we find written in crisp lettering and placed where everyone can see it: MEMENTO MORI.

This remains one of the principal motifs of all serious poetry, philosophy, history, and religious literature from that time forward. (Indeed, the comparative absence of meditations on death in contemporary culture is, historically speaking, quite bizarre—though perhaps some horror media fit the bill.) Many memento mori symbols remain familiar: the butterfly, which as a caterpillar must accept encasement in a coffin-like chrysalis; the hourglass, whose time is decidedly finite; the human skeleton (or often just the skull), an obviously natural emblem of death; the scythe, with which ripened crops are cut down for harvest. When Christianity arrived, bringing with it a complex attitude to death, it brought in a new memento mori symbol (one with many other meanings besides), the cross. However, as we’ve mentioned that complex attitude toward death, let’s make a turn there.

In general, then as now, people were not keen on death. Some societies or sects did cherish a hope of reward hereafter. A few writers described the underworld as including the Elysian Fields, the gate to which might be noble or divine ancestry, outstanding virtue, or participation in a mystery cult; a few marginal groups like druids or Pythagoreans believed in reincarnation. But most people thought of being dead as a vague, unpleasant fog—lightened here and there by a libation from one’s living relatives, maybe, or darkened by witnessing the punishments of those few figures wicked enough to merit damnation. There were also those who thought death was simply ceasing to exist, though this opinion was not then associated with atheism or skepticism. Regardless, the land of the living was more important than whatever lay beyond it.

Certainly there is no happiness within this circle of flesh, nor is it in the Opticks of these eyes to behold felicity. The first day of our Jubilee is Death; the Devil hath therefore failed of his desires: we are happier with death than we should have been without it ...

Christianity turned this notion on its head. As Chesterton put it in The Everlasting Man, “The Church did not try to destroy all that creation of gold and marble; but it contemplated a world without it. It dared to look right through it as though the gold and marble had been glass.” Christians preached not only that death was a punishment, which might feel natural enough to believe, but that death was not even permanent. The case of the Church’s founder after his execution was exceptionally prompt, but what had happened to him was supposed to happen to all humanity in the long term, to be followed by a universal judgment and a new cosmos free of death, decay, pain, and evil.

From here, death expands into the broader subject of eschatology, or the study of “last things,” embracing nearly all topics relating to death, the future, and eternity. In particular, the Christian and Islamic doctrines of heaven and hell became important*: heaven or paradise was a blissful state of recompense for the righteous, and hell a punishment awarded to the wicked. Out of this “central” concept, their picture of the afterlife ramifies into far more branches than we have time for: widespread beliefs like Purgatory, where the still-imperfect righteous are cleansed; more speculative ones like the Limbo of the Infants, where those who have not merited heaven but do not deserve hell are consigned to an in-between eternity (on some showings melancholy, on others quite pleasant yet far inferior to heaven); and quite niche ideas like aerial toll houses (possibly a relic of Gnosticism), which depict the dead soul facing accusing devils in its attempt to ascend to heaven, and perhaps succumbing to their denunciations.

This is related to the idea that it is spiritual rather than physical death which matters most, an outlook which helped fuel the early Christians’ reverence for martyrdom—a reverence many Romans found nauseating. Of course, “spiritual death” is rather a cryptic phrase, not unlike St. Paul’s “spiritual body” in the First Letter to the Corinthians. The traditional Christian explanation of the phrase is that sin is spiritual death, or at any rate that knowingly and freely choosing to sin is spiritual death; the fourteenth-century mystic Lady Julian, often hailed for being what today might be called “edgy,” was in truth being orthodox and indeed almost ordinary when she wrote that she “saw no hell but sin.”

Turning back to death in literature, we also find, here and there, the motif of rare individuals who have mysteriously escaped death—Enochs and Elijahs, Arthurs and Barbarossas. Occasionally, as with Tolkien’s Elves, some whole race or society are thought of as exempt. The gravest form is, no doubt, the Roman Catholic dogma of the Assumption of the Mother of God. At the playful end, we have things like the nineteenth-century Irish fable of “Stingy Jack,” a drunkard who somehow contrived to so profoundly offend both hell and heaven that he was banned from entering either one, and to this day wanders the earth, his path lit only by a candle preserved in a hollowed-out turnip—though in some versions, it is instead a pumpkin. But now we are straying into the territory of the other half of the idea under discussion …

*Some readers may be surprised to see Christian and Islamic theology grouped together without mention of Judaism, but overlaps of this kind are more frequent than many people realize. The New Testament and the Quran are fairly explicit in their discussions of the afterlife, whereas the Hebrew Bible is for the most part vague on the subject. Judaism in general does affirm a “world to come,” but it is conceived of rather differently from the other Abrahamic faiths, and does not normally involve any doctrine of eternal punishment.

Gabriel Blanchard, a freelance writer and mortal, has a bachelor’s degree in Classics from the University of Maryland; he has worked for CLT since 2019, where he holds the position of editor-at-large. He is a proud uncle of seven nephews, and lives in Baltimore.

If you enjoyed this piece, you might also like our author profile of Hans Christian Andersen, this overview of the concepts of good and evil, or this essay on Macbeth from one of our outstanding students. And as always, be sure not to miss our podcast, Anchored. Happy Halloween!