Our Stronghold Against Tyranny 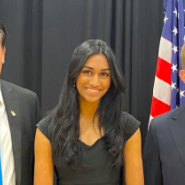 The Constitution is an indispensable check on the imperfections of human nature, which we disregard at our peril.

Miss Shrita Bhat is a high school junior at Founders Classical Academy, a charter school in Lewisville, TX. Founders Classical Academy is a CLT partner school that seeks to prepare its students to be mature American citizens through both intellectual and moral formation; their motto is scientia, virtus, et libertas, or “knowledge, virtue, and liberty.” Miss Bhat recently gave a speech on Bill of Rights Day, which our founder Jeremy Tate had the pleasure of hearing; that speech is transcribed and reprinted here.

Birthed out of the shackles of European transatlantic tyranny, our country was declared independent in 1776 with the intention of preventing any infringement on its people’s natural rights. The scars of such tyranny still raw, the possibility of its manifestation again remained a question among our Founders during the fruitlessness of the short-lived Articles of Confederation, and it was remedied in the founding of the American Constitution. Founder John Adams referred to the move for American independence not as an outlet for tyranny, but as a “furnace of affliction” such that our vices may better be “purified”, inferring that our unevaluated human nature is inherently devoid of self-correction. As the American government relies on the consent of those governed, its framework must thus adhere to that of those governed. The American Constitution secures its government free of tyranny by operating in response to its people’s individual human nature and rights, such that the freedom and prosperity of our nation remains secure.

Enlightenment philosopher John Locke, a heavy influence on the authors of the U.S. Constitution, wrote that man is inclined to the mindset that “absolute power purifies men’s blood, and corrects the baseness of human nature” when discussing the role of government. Mankind is predisposed to fall prey to such misconceptions of government power, namely that the presence of authority insinuates the encroachment of rights. Yet, human nature also holds steadfast to its unalienable claim to freedom, inferring arrogance in this nature. This two-sided propensity of mankind was interpreted by our founders as arguably fundamental, as according to the Protestant culture during the dawn of the United States. Even draftsman of the Constitution itself, James Madison, argued in Federalist 51 that man’s nature cannot be flawless, for “if men were angels, no government would be necessary.” The prevention of tyranny is challenged by the complex human nature of the governed, which perceived battle between the government and the governed our Founders so often contended with.

But our government is no panacea to our human nature, nor is it something forcing submission. Aristotle argued that any ideal government that perfectly reconciles with our human nature simply does not exist; the duality of human nature is embedded into all of man’s crafts and their application, declaring the reality of any Elysian government fictional. In Locke’s words, governance in practice, therefore, “in the utmost bounds of it, is limited to the public good of the society.” The existence of our government, or any, is not to eradicate our vices in a utopian manner, but to focus our virtues for the benefit of society as a whole and work in recognition of man’s fallibility such that a better national reaction to its potential may be prepared.

In Federalist 51, Madison states, “But what is government itself, but the greatest of all reflections on human nature?” The guiding principle to which our Declaration of Independence and the Constitution holds fast to is the tenet that our government is “of the people, by the people, for the people”, as Abraham Lincoln encapsulated so succinctly in the Gettysburg Address. Our government is a civil body politic in the sense that the citizens are themselves constituent elements of their law-making body, thus comprising this body’s entity. Human nature must therefore be mirrored in our government, primarily in our lingering obsession with the inalienability of our rights paired with the necessary, consensual prevention of their infringement.

The Constitution's protections against factionalism are the key to its success, as they balance the two conflicting sides of human nature.

This fixation in mind, our Founders recognized that the nature of this country’s hoi polloi breeds factionalism, and, as Madison explains, our various passions have kindled “a mutual animosity” that makes us “more disposed to vex and oppress each other than co-operate for [our] common good.” Though full of opportunity, the melting pot of America can dilute its unity, allowing the people, the power of our government, to neglect their duty in protecting the nation’s welfare by forming factious, narrow-minded mobs. The intense concentration of any such bias in our government is no different than tyranny, as it forsakes the cumulative interests of the nation in an absolute, non-consensual manner. With the nature of its people sewn into its own, the government and its protections against concentrated factionalism is therefore a major keystone to its success. Without such shelter, our political freedom will collapse. The efforts of such a safeguard is seen in the Constitution’s bicameral legislature, in which the respective terms and election processes for the House of Representatives and the Senate are monitored to prevent the rule of factious mobs while also maintaining our country’s promise to democracy.

The constitutional powers and jurisdictions between the three branches of our government are rooted in the division of powers, which capitalizes on the duality of our non-angelic human nature for its own and for the society’s prosperity. The separation of powers engraved into our country’s legislative, executive, and judicial branches is itself a fixed institution created to resource the pliability of our human nature. Furthermore, deliberate checks on the concentration of power within a single branch itself, in Madison’s words, relies on the power of the others to have “the necessary constitutional means and personal motives to resist encroachments of the others.” The Constitution’s approach to our human nature is reflected in its divisions of power, checks and balances, and regime in which the branches of our government are constantly engaged in both synergy and division, a combination clearly mirroring human nature’s duplicity and internal opposition.

C. S. Lewis mentions in The Four Loves that unity comes when two parties “look in the same direction” or function similarly. Unity in our longstanding nation has been and is still prospering in a similar way: our government reflects its people and checks our human nature while our human nature checks it, uniting the two seemingly different entities together. In our contemporary, heavily-political society that capitalizes on the factionalism manifested from our human nature, we ought to maintain the important defenses our founders listed in our Constitution. The freedom of our union relies not only on the checks sewn into our government itself but on the checks we must actively institute on ourselves daily.

If you liked this post, take a look at some more essays by our high-performing students, on topics ranging from the meaning of the national anthem to Victorian ideals of womanhood to unsolved paradoxes in astrophysics. You might also enjoy our seminar series, Journey Through the Author Bank, in which scholars from across the country discuss the great minds whose work we place before our students on the Classic Learning Test.